Today, we’ve resubmitted portions of our application to the City of San José, including the Downtown West Design Standards and Guidelines (DWDSG) and the Rezoning or General Development plan. These documents, in combination with other approval documents such as the Environmental Impact Report, provide a roadmap to ensure the vision for Downtown West is delivered as it’s built over several years. It covers everything from park and building design to historic preservation, and street improvements.

Last October, we shared a major update of the Downtown West project application and many of you shared what resonated with you, where you had ideas for improvement, and areas where you wanted more information. We reviewed your comments, and together with input from City staff, we’ve continued to refine the project and the DWDSG.

Highlighted below are a few of the topics that came up most often, each followed by an update on changes we’ve made to the framework plan or the design standards and guidelines. We look forward to continuing to work with all of you to make Downtown West a shared part of San José.

Delivery of a quality open space network with diverse experiences

The trail and ecosystem of Los Gatos Creek provide essential connectivity within Downtown West and bolster citywide and regional networks—with a park or plaza at nearly every intersection and near each neighborhood. This distributed approach reflects community feedback that pointed to a network of new spaces easily accessible to nearby neighborhoods and complementary to existing larger parks nearby. The project provides 15 acres of publicly accessible open space; a combination of 4.8 acres of fully improved and turnkey City-dedicated parks and 10.2 acres of voluntarily provided project sponsor-owned open space. 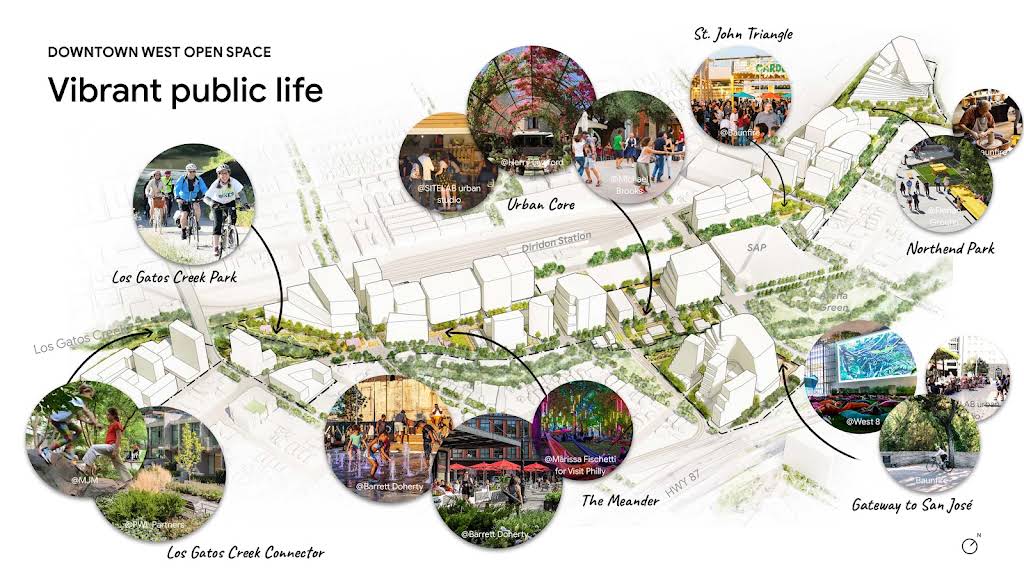 At Los Gatos Creek Connector, the open space along the rail corridor was expanded to increase opportunities for neighborhood amenities near residential uses and to extend existing tree canopy and habitat from the Los Gatos Creek Riparian Corridor. At Northend Park, we heard community interest in having an inviting and contiguous open space that responds to the active ground floor. We’ve updated our site plan to provide for that. 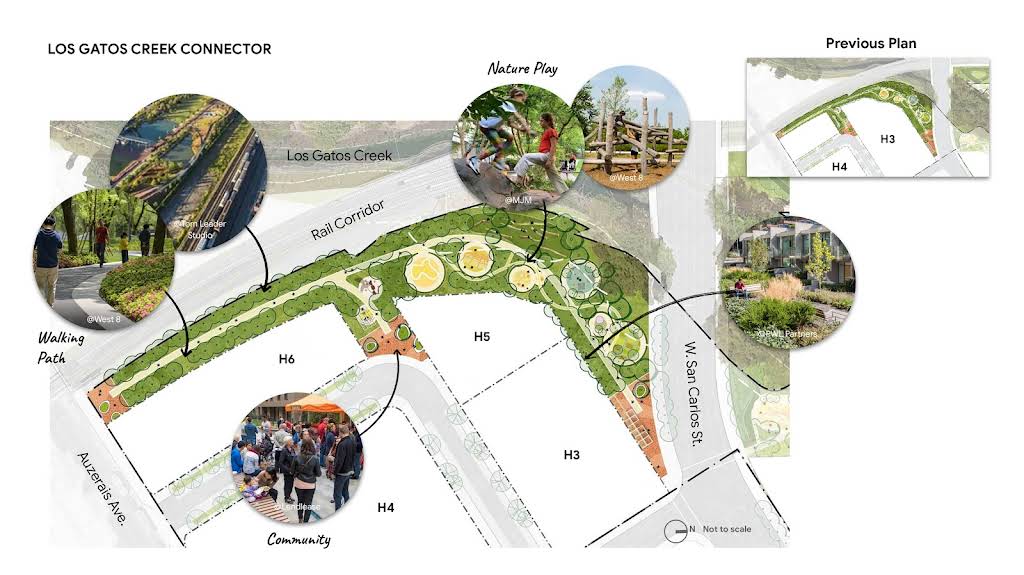 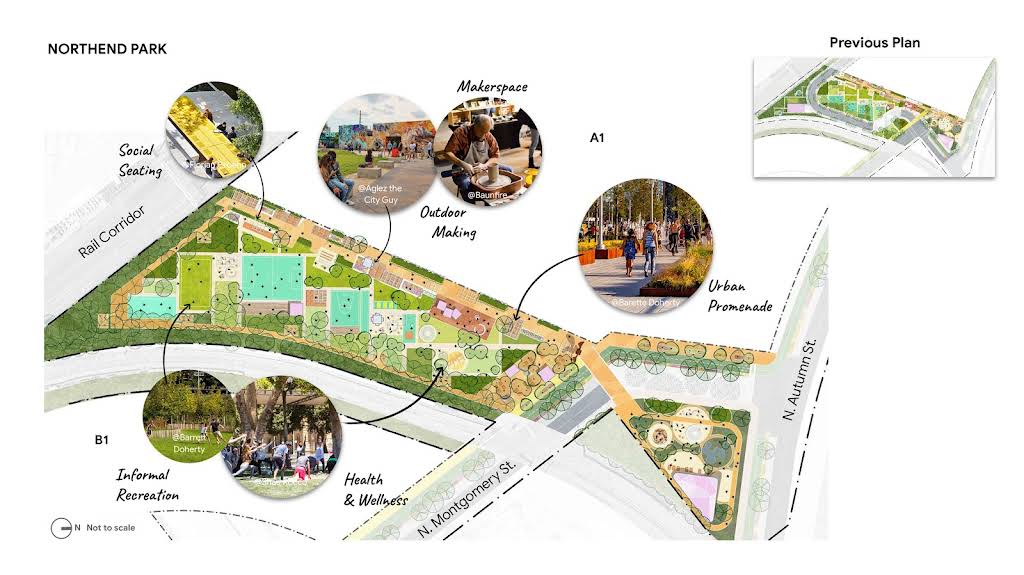 In addition to open space design updates, we heard the importance of protecting the riparian corridor and its flora and fauna. The DWDSG sets out a framework to support biodiversity and ecology within a high-density urban environment, while also improving visibility, access, and connectivity along the riparian corridors. The plan for Downtown West includes improvements of over 4.25 acres of riparian habitat, and this latest update includes consistency with the Santa Clara Valley Habitat Plan, with more generous riparian setbacks for development. The update also includes strengthened controls for bird-safe design, including more stringent and protective lighting measures along riparian corridors.

Recognizing the unique history of the place 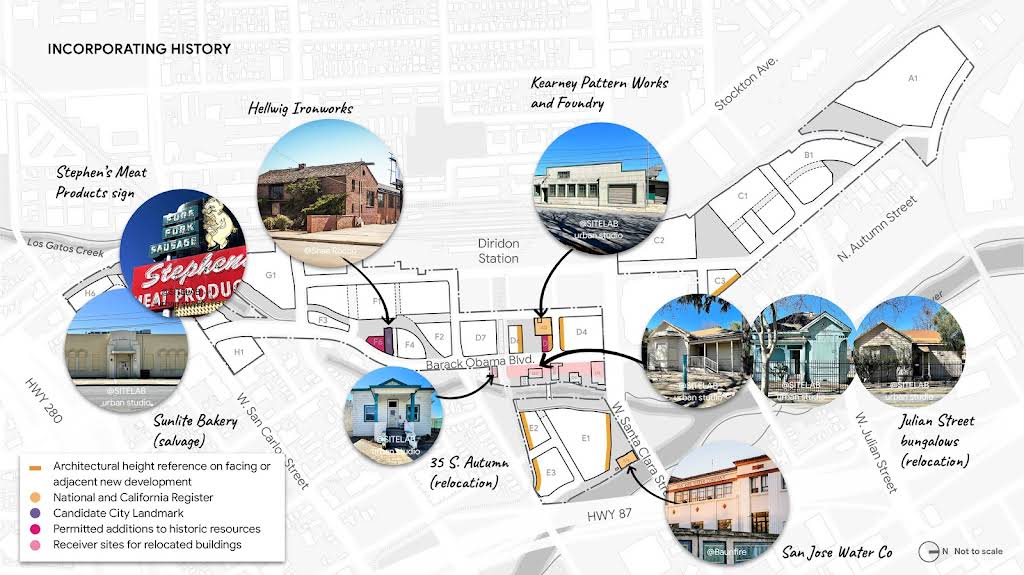 Historic resources diagram of buildings that are reserved and/or relocated

To tie all of this together, the DWDSG also encourages sitewide commemoration of San José’s culture and history through interpretive elements in open space.

Our project team continues to work with the City of San José and other agencies involved in the surrounding area—including Diridon Integrated Station Concept Plan—to collaborate on an integrated vision for the future of Downtown West and the greater Diridon Station Area.

First, Cahill Street through the core of the project—between West Santa Clara and West San Fernando—was removed from the project boundary to avoid confusion. The City and DISC partner agencies will continue to refine the vision for Cahill Street as the front door of the current and future station.

Two additional minor project boundary amendments include the removal of a parcel adjacent to California 87 and the private segment of Lenzen Avenue at the very north side of the site, owned by Caltrans and Caltrain respectively. Neither directly impacts project connectivity, and project coordination will continue along these project edges. Finally, we’ve incorporated the City Council’s updated naming of South Autumn Street and Bird Avenue to Barack Obama Boulevard. 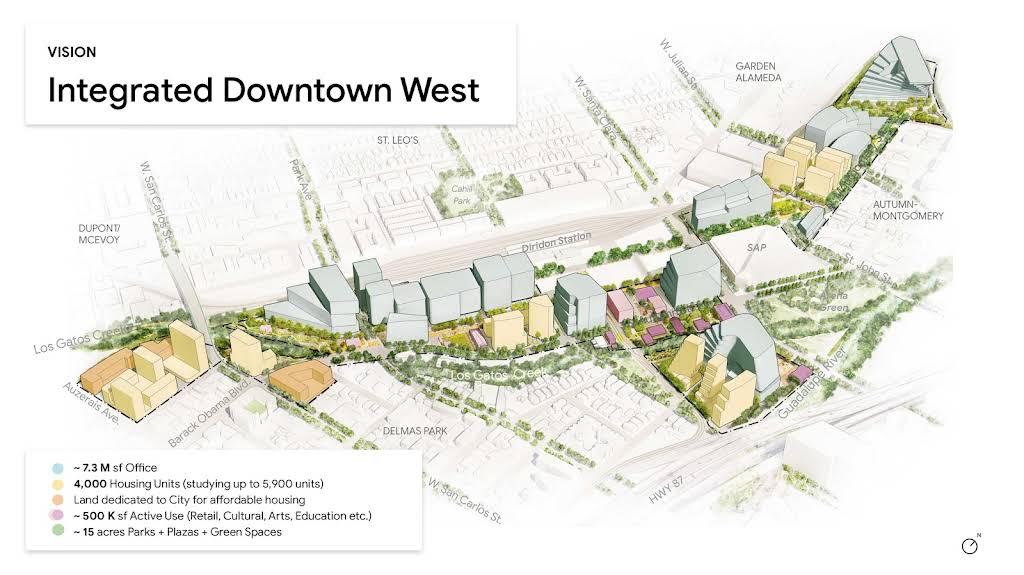 Thank you for providing your input on the DWDSG over the past several months, and for the thousands of touchpoints that preceded the drafting of these documents. We think these updates put even more polish on a shared vision we started with the San José community back in 2018, and we’re excited to bring it forward for decision makers this spring.